Home | Blog | Uncategorized | Is nasal reshaping surgery right for you? | Learn from one of the pioneers of modern rhinoplasty, Dr. Quatela

Is nasal reshaping surgery right for you? | Learn from one of the pioneers of modern rhinoplasty, Dr. Quatela 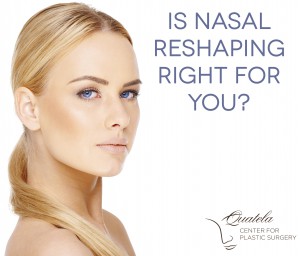 We sat down with Dr. Quatela for an in-depth look at rhinoplasty, or nose reshaping, surgery.  As a pioneer of modern rhinoplasty, Dr. Quatela has dedicated most of his 27 years of experience perfecting his technique to achieve uncompromising results.  Here’s what he had to say about this popular procedure.

Q: Who is the ideal candidate for rhinoplasty surgery?

A: The ideal candidate for a cosmetic rhinoplasty is someone who is properly motivated.  By that I mean that this is something they’ve thought about for a long time, that the motivation to do this comes from within them, and that what they see in the mirror is what you see in the mirror, so they are realistic about what they see.  I think that the more specific a patient is, for example they address that the tip is too wide or they have a bump on their nose, the better patient they are.  The more nonspecific and vague, “I just want my nose to look better,” “I want it to look beautiful,” “I want to look like so and so,” the less of an ideal candidate they are.  So I think motivation and specificity about their concern are important.  The other factor is that some patients also have a functional component where they can’t breathe through their nose or their nose is crooked, so those are other good indications for having a cosmetic rhinoplasty.

Q: Do I have to be a certain age to have rhinoplasty surgery?

A: I’m often asked about the proper age for a rhinoplasty.  The youngest age that I think you should do [rhinoplasty surgery] is gender specific.  For a young lady it would be around 13, a male would be more like 14 to 15.  But it’s also a judgement you make based on looking at the development of the nose.  As far as the upper end of age, probably the oldest I’ve done [rhinoplasty surgery on] is a 79 year old, and it was purely cosmetic.

Q: What activity restrictions are there after rhinoplasty surgery?

A: One of the most important restrictions after rhinoplasty is that once your cast comes off, which is after a week, you are very careful about the sun.  Any kind of sunburn would traumatize the skin and cause significant swelling, so we have patients wear sunscreen.  The other thing is we don’t want any aerobic activity for three weeks after surgery because elevating your blood pressure and heart rate is going to cause more nasal swelling.

Q: What can I expect after rhinoplasty surgery?  When can I go back to work?

A: With a rhinoplasty you expect some bruising, surprisingly it’s not with the nose, it’s about the eyes, and there’s a cast on your nose.  So I think for the first week most people are not visible in public.  Not that they don’t feel well enough to be out in public but because with the cast and bruising it’s pretty obvious.  At the end of the week the cast comes off, the bruising is probably diminished by at least 50-75% and it’s more easily covered with makeup.  Some people will go back to work immediately when the cast is removed and just use camouflage makeup, so some people return to work after a week.  It’s my opinion and  recommendation that people take two weeks off because by the time two weeks are over, nasal swelling is down, you’re breathing better, the bruising is almost gone, and I think that works out better for the patient.

I follow all rhinoplasty patients fairly closely for a full year.  It’s my belief that in a primary rhinoplasty it takes a full year for full settling to occur.  There are little changes along the way that you can modify with certain medicines that will help the skin shrink-wrap better on the framework and the key is to get the skin envelope to cooperate with what you’ve done under the nose so it translates through [the skin], and that’s what happens during that first year.  The nose looks pretty good prior to a year; most of the result is front-ended so that a month afterwards you’re looking at 75-80% of the result.  It’s the last 10-15% of the result that you see over the course of the year.

Q: How do I know if I’m emotionally ready for nose surgery?

A: The most significant change that I can make in someone’s appearance is a rhinoplasty, especially structurally.  It really is an important decision in someone’s life, and you have to be certain that you are prepared for this change.  To see yourself in different views is so important.  So I think with computer imaging now we’ve been able to eliminate some patients who perhaps the change could be too drastic or inappropriate.  The other thing that computer imaging does is it prepares you for the change.  You’ve already seen what you may look like and provided that your end point is the same result that you derived on the computer image, you’re more mentally prepared for that.  Anybody who is truly motivated (and if the patient is chosen properly), is ultimately happy and gets through that period after surgery very nicely.